Lady Virginia Williams, or 'Ginny' as she was better known, met Frank Williams - failed racing car driver and aspiring Grand Prix team owner - in 1967. Lending her assuredness, intelligence and strength of character (and money!) wherever it was required she became an integral part of Williams’ success.

Lady Virginia Williams (nee Virginia Berry) met Frank Williams – then a wheeler dealer wannabe Grand Prix team owner in 1967 when she was working as a receptionist in London.

‘Ginny’ as she was better known bought into her then boyfriend Frank’s racing dream from the very beginning, both figuratively and literally, selling her flat in Knightsbridge to fund Frank Williams Racing Cars .

They married in August 1974 in a ceremony squeezed into a gap between Formula 1 races – something that would come to define their relationship over the years.

Once married, Ginny continued to play a vital and yet largely uncredited role in the many successes of the Williams Formula 1 team.

It’s little exaggeration that without her support for Sir Frank – both emotional and financial, providing the stability from which the Williams team was able to grow – it wouldn’t be around today.

She was Sir Frank’s greatest advocate and also his closest advisor. Sir Frank leant on her heavily, and she gave him all the support he required. She was feisty, intelligent and had incredible strength of character.

But she was also hands on, even sourcing the warehouse in Didcot which became Williams Grand Prix Engineering’s factory when it was founded in 1977.

In 1991, her book ‘A different kind of life’: a memoir of the enormous sacrifices the whole Williams family made in order for Williams to go racing was published.

It is an honest account of the impact of being married to a man who is completely fixated on Formula 1 at the expense of all-else had on their relationship, particularly during the time prior to 1979 when success was difficult to come by and the pair were scrabbling around to finance a family whilst at the same time trying to keep a Grand Prix team going.

It also reveals the struggles she and Frank had to overcome following Sir Frank’s life-changing car crash in the south of France in 1986 that left him paralysed from the shoulders down.

A different kind of life was used as the basis for the 2017 film ‘Williams’ that builds on her memoir to create an incredibly moving documentary primarily about the Williams family and, almost by association, their Grand Prix endeavours and achievements.

Ginny and Frank remained together until her death in 2013 at the age of 66 following a two-year fight against cancer.

Both Williams cars carry a butterfly on the nose as a reminder of Ginny’s lasting impact on the team that her daughter Claire now runs. 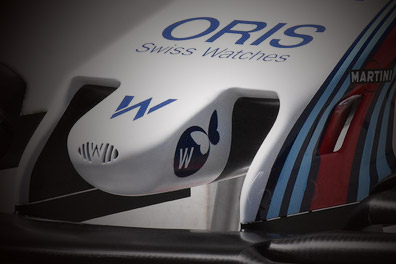